Launching objects into the space, for more than 50 years, is one thing. But, leaving more than 500,000 pieces of them to orbit around the Earth uselessly, and ineffectively, is just a human waste. This so-called human waste, or ‘’space junk’’ is consisted of fragments, and pieces, who once were part of a spacecraft, satellite, or vehicle stages. As a result, some of these parts during time have fallen back on Earth, and some had burned up in the atmosphere. But, according to the space agencies, about 750,000 pieces of space debris are currently orbiting the Earth. This is indeed threatening.

So, for the safety of astronomers, scientists use a radar to keep an eye of the debris in the orbit. Their speed of flying is up to 17,500 mph. That is truly dangerous, because it is fast enough even for a small piece of cosmos ‘’trash’’ to collide into a spacecraft full of humans. Also, the further, and further this ‘’space junk’’ is getting bigger, the difficult it will be to send someone, or something into the space. It could cause a major space pollution. We can literally trap ourselves here on Earth , if we don’t take immediate, and urgent actions to prevent it. So, the question is : How do we clean this ‘’space box’’ full of human made garbage? 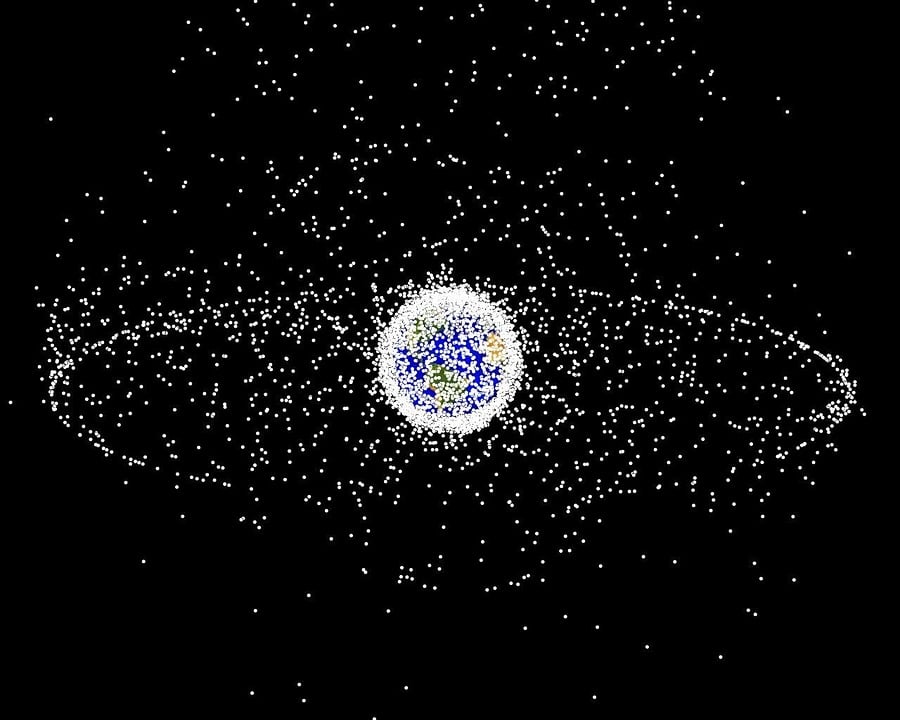 “It’s a serious, serious challenge. We’ve reached the point of no return. That’s the reality of it and people don’t want to admit that reality.”, says Marshall Kaplan, founder and principal of Launch Space in Bethesda. She also mentions that:“However, this is not simply a NASA issue … it is an international issue, and will require a carefully coordinated effort”. Well, NASA has already proposed a program that could clean this dirty mess around the Earth. It’s called a Space Debris Elimination program. This program involves shooting gasses into space in order to minimize the debris orbit, so that can later fall back to Earth , and burn up in our atmosphere.

Early studies in 2012 indicated that this method could be enough to‘’upset’’, and relocate the space debris into a lower orbit. On the other hand, the European Space agency in 2014 had publicly suggested a completely different kind of mission in order to deal with this chaos of space debris. Their idea is called E-DeOrbit. It is a machine that they plan to send in the space. This machine is intended to shoot old satellites, and then release them into the atmosphere with the help of a small rocket, or missile. They estimate that the mission is going to be launched by 2021.

However, besides the involvement of NASA, and the European Space Agency, there are other entities, and companies who are recommending five more solutions to deal with this space chaos. They are:

‘’Clean Space One’’ is a project designed from a Switzerland spaceflight company. It involves using a small space plane , that will launch aSwiss Cube nano satellite, or also known as ‘’janitor’’ satellite, directly on the Earth, in order to clean up the ‘’space junk’’ by 2018.

“Space agencies are increasingly finding it necessary to take into consideration and prepare for the elimination of the stuff they’re sending into space. We want to be the pioneers in this area,”said the director of Swiss Space Center , Volker Gass. Grégoire Lorétan, the head of S3 communications also added :“In 2018, [Clean Space One] this will be one of our first launches, if not the first one”.

So, identifying, recognizing and collecting all the objects with ‘’exhausted’’ life limit into the space is the main goal of this mission.

In 2014, the researchers from the Japan Aerospace Agency for the first time had announced their own technological solution in dealing with the ‘’space junk’’. The suggested technology includes a spacecraft, who will guide an 700 meter long electro dynamic tether into a dirty ‘’little’’ piece of cosmos trash.

According to a report from the Agency France Press the electro dynamic tether would create an electrical energy, and power that will slow down the space debris, and then the operating spacecraft will ‘’take advantage’’ of this slow moving ‘’space junk’’ , and pull it into a lower and lower orbit, so it can eventually burn up into the Earth’s atmosphere. Additionally, according to a representative from the Japan Aerospace Agency, the spacecraft will target large pieces of space junk that are ranging in size from a few hundred kilograms to a few tons.

Nonetheless, the real use of this technology for an actual mission could take in the mid-2020.

“Sling-Sat” is the imaginative idea of the Texas University professor Daniele Mortari, and his PhD student Jonathan Missel, and it was used like a coping mechanism with the space garbage on Earth. It is a satellite space sweeper, and it is planned to capture the pieces of space debris, by carefully moving from one to another, without burning much fuel. Later, the collected ‘’space junk’’ would be ‘’unleashed’’ to burn in the Earth’s atmosphere.

The design ideas for ‘’Sling-Sat’’ were still researching in the early 2013. However according to the PhD student Jonathan Missel: ‘’We are at a point where the problem needs to be solved, with active removal, not just avoided.” Therefore, the professor Daniele Mortarti confirmed, and added: “The goal of this mission is to remove as many pieces of debris with the minimum amount of fuel”.

A British satellite, called ‘’Cube Sail’’, in 2011 was launched to ‘’check’’ how the radiation pressure from the solar sail can push down the space debris to lower orbits, away from the Earth. “Successful deployment and testing of the sail can enable a low cost/mass solution to be used for future satellites and launch vehicle upper stages reducing dramatically the problem of space debris,”said the project leader Vaios Lappas.

He also added : “We are keeping our design as simple as possible using well known materials, components and a simple design based on self-deploying booms coiled around a simple roller mechanism,”  Therefore, this ‘’shoe box’’ satellite could further be launched with other missions as a small Nano-satellite. Also, with a bit of luck,this might lead to future Cube Sail designs,who will clean up some of the orbital mess, because “Protecting our planet and environment is key for sustainable growth”, in accordance with Lappas.

The Huff and Puff is an initiative taken by Daniel Gregory from the BBN Technologies in Virginia. It is officially called the Space Debris Elimination, and the idea is to shoot atmospheric gasses in the targeted space trash. ‘’We can affect many pieces of debris simultaneously, if they are all close together”, said Gregory. Also they promise results that the air gasses would fall back into the atmosphere, without interfering with the low-Earth orbit satellites, or as Gregory added in his speech :“Our preliminary results show that we can affect the orbits of low-Earth orbit debris.We think we have a viable solution’’.

But, regarding the fuel that needs to be detonated in order to create the atmospheric pulse , some scientists estimate about 500 gallons of gasoline, although the optimal fuel level is still under study. Nevertheless, Gregory confirmed :“We won’t know that until we determine exactly how much energy is needed and which fuel is best suited to produce it. Most of the total cost will lie in the cost of energy.”

The growing dirt of space debris can have a life-death consequences on us, our Earth, and environment. It could easily cause a massive space pollution. This later could make the launching of future space rockets, and satellite missions practically impossibility to initiate. It is an international issue. It needs to be given a special attention, and commitment. We need more inventive, and creative minds, who are willing to commit themselves in finding ‘’the one’’ original solution in dealing with this, “filthy’’ issue, that is surrounding our Earth. I know that finding the appropriate ‘’vacuum cleaner’’ for cleaning our Earth is the ultimate challenge. But, I also know, and believe that we are brave enough to say : ‘’Challenge accepted’’ !

Leave behind your thoughts and suggestions on how to save our planet from space debris. Share this information and subscribe with us for more interesting articles.

10 Types Of Toxic People You Should Avoid In Life &...

How To Know And Deal With Haters Around You?

What Happens When You Quit Smoking? Benefits of Quitting Smoking!