When we are thinking of intelligent species, besides humans, most of us list animals like chimpanzees, cats, dogs, and whales.  But do you know there are birds as well known to be the smartest and intelligent ones?  One of them is the African grey parrot.  We will understand more about this bird and the facts as we go ahead. Stay tuned to also find the dumbest birds in the world.

Among the animal species, the primates (chimps, gorillas, orangutans, etc.) get credits as the smartest animals. Indeed, many of us mourned the passing of Koko, the gorilla who learned how to talk using sign language, earlier this summer.
But, there is yet another group of fauna we should count among intelligent species: birds. Are you surprised to know there are smart birds too? Perhaps, the most surprising thing is these birds are also the smartest birds in the world.  One of them is the African grey parrot with many facts about it in this article.
The reason you could be surprised is that we generally associate intelligence with the size of the brain. Most primates’ brain, for example, has comparable size to the human brain. But not birds, isn’t it?

When It Comes to Intelligence Size Does Not Matter

Scientists are very clear on this issue: brain size is not related to intelligence.

According to an empirical example shared in an article in Smithsonian magazine, dog brains are approximately 30% smaller than wolf brains.

Yet, considering their evolution and how they thrive in changing environments, it is obvious that dogs outsmart wolves.

For one, they can make any human get off the couch and take them to the park to give them an extra treat. It may seem cute to any dog owner, but the “puppy eyes” look dogs have mastered is actually a smart way to create emotional responses.

See this: Most Endangered Species of This Planet

So, given that brain size does not matter, we should take a fresh approach to the way we consider birds from the point of view of intelligence. They may have small brains, but they know how to use them.

How Can We Define Intelligence in Any Species?

First of all, it is important to ask ourselves: what does it really mean being intelligent? What kind of criteria do we apply in assessing intelligence?

Using these criteria, here are the smartest and intelligent birds in the world. Please remember that this is just a list and not a top. As you will see, each bird species is smart in its own unique way and it would be impossible to pit one kind of ability against another.

The Smartest Birds In The World 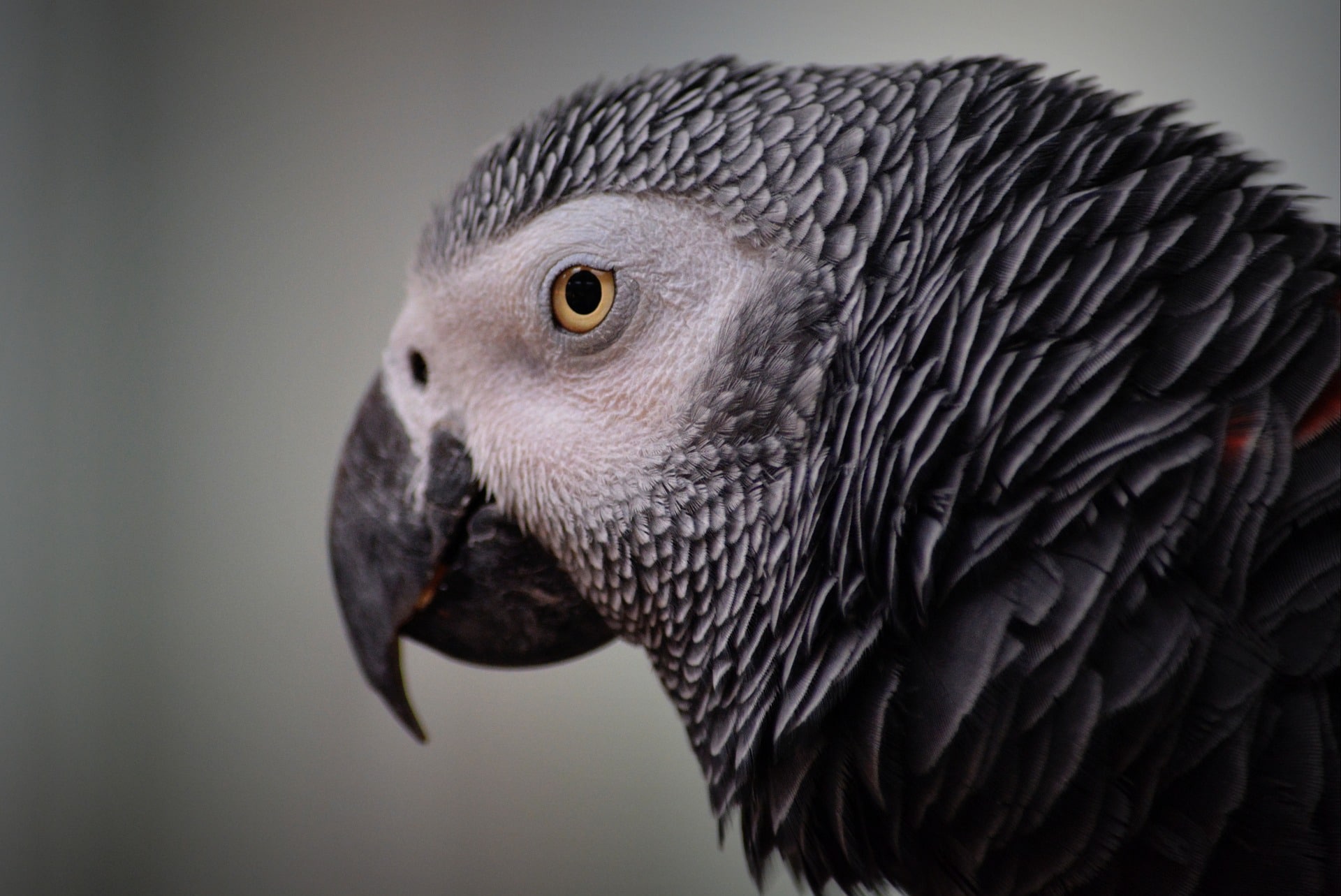 Let’s look into the facts about the African grey parrot.  This order of parrot may be nothing special to look at compared to other colorful members of the species. But it is brains, not beauty that makes it remarkable. The African grey parrot is capable of understanding the meaning of words, which is a real fact.

This ability is far superior to that of the average talking parrot, which simply mimics human sounds. One of the stars of the species, an African grey parrot named Alex, was capable of recognizing the names of over 50 objects, several colors, shapes and quantities.

The most amazing fact about Alex the African grey parrot is that it asked a question. This is something that no other species except for humans ever did. The parrot wanted to know what color it was which for sure is a sign of an intelligent bird.

2. The Eurasian Magpie – A Cute And Smart Bird

The highest form of intelligence is self-awareness. This means that one knows that one is alive and exists as a unique and individual organism. One of the ways of testing self-awareness is being able to recognize oneself in the mirror. 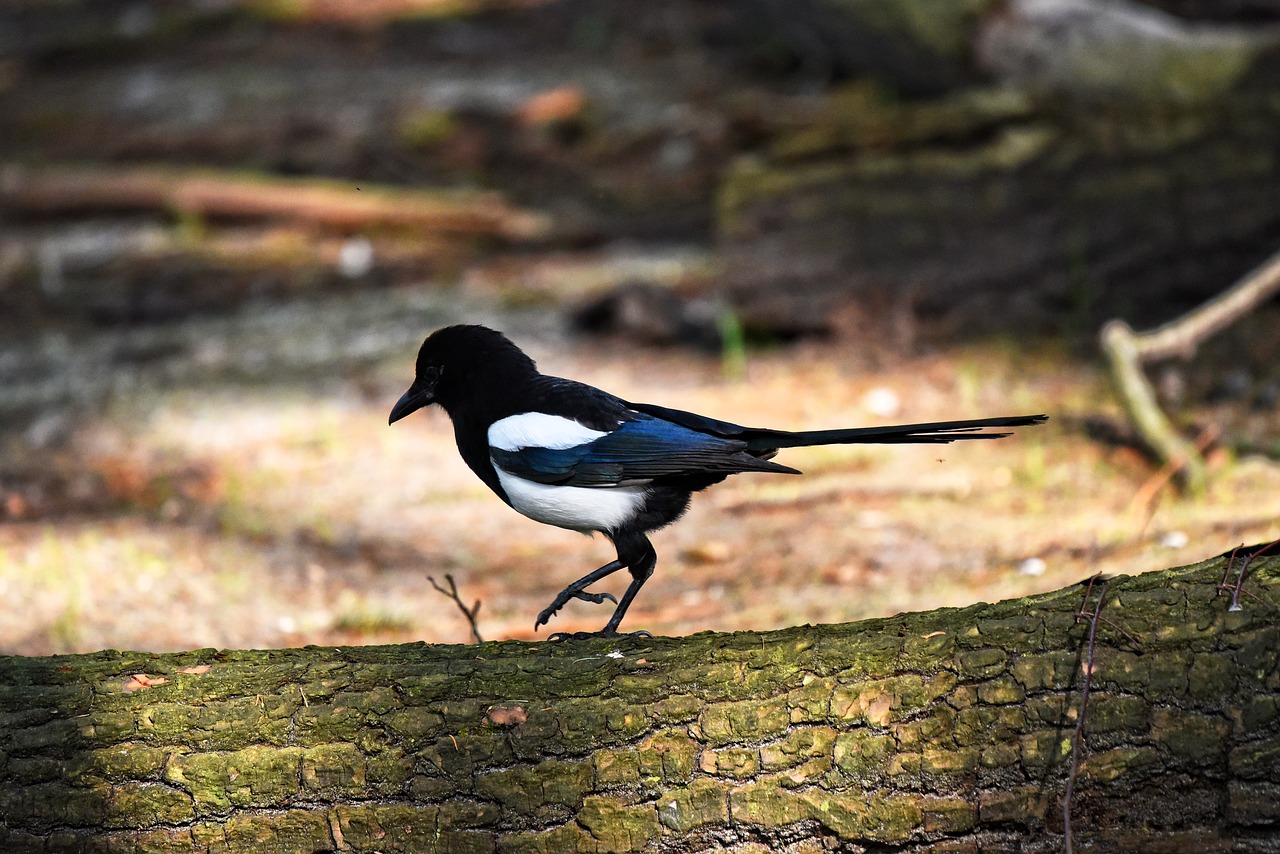 Most cats and dogs (considered intelligent animals) are unable to do so. They perceive the image as for another animal and either attack it or run from it (check all the funny videos on YouTube to check that it is so).

However, a humble bird is capable of recognizing its own image in a mirror: it is the Eurasian magpie.

How do we know that this small black and white bird is self-aware?

In a test, a small sticker was placed on the body of a bird, in a place that it could not see. Once placed before the mirror, the bird tried to remove it. This means that it recognized its own body and identified a foreign object on it.

So far, the Eurasian magpie is the only non-mammal species that passed this self-awareness test.

3. The Raven – Amongst The Smartest Birds

Edgar Allan Poe made the raven famous (or infamous, if you like). But there is more to this species of bird than its somber looks. This is one of the smartest birds you are likely to meet. 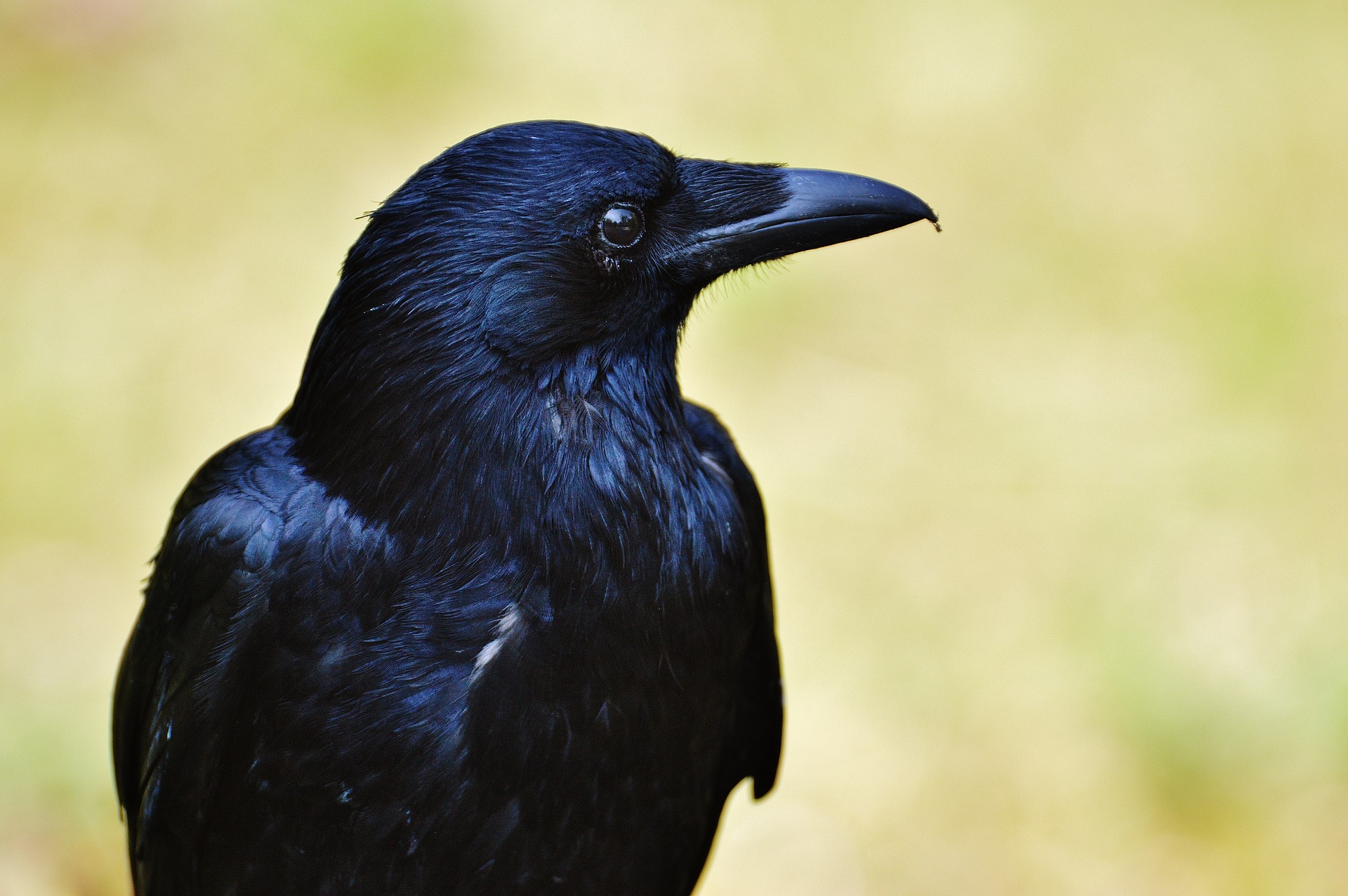 A study published in the Science magazine in 2017 indicated that ravens are not only capable of using tools, but also of planning ahead a task.

The study consisted of several experiments. One of the easiest was to teach the raven how to use a tool to get to a piece of food.  Twenty-four hours later, the raven was placed before a range of different tools. The bird picked the exact same tool and managed to get the piece of a treat once again.

Although they belong to the same large family of corvids, crows are a different species from ravens. They are also great at using tools.

This 4-minute video shows an experiment in which a crow is placed in the position of getting to a piece of treat submerged in water, without any kind of prior training or explanation. This is a fantastic feat by an intelligent bird. However, crows manifest their intelligence mostly by their capacity to memorize faces.

Read this: Why Do More Species Live Near the Equator?

A study published in the Behavioral Ecology and Sociobiology journal in 2015 demonstrated that crows tend to keep their distance from people they’ve never met before, but become more sociable around familiar faces.

They are also able to remember people who hurt them. In a separate experiment, researchers wearing masks started sharing treats among crows while holding taxidermied crows in their hands.

Instead of accepting the treats, the crows harassed the researchers and even warned other crows to stay away. A few weeks later, the researchers returned to the same spot without the taxidermied crows. However, they got the same treatment from the population of crows, a sure sign that they remembered the malefactors.

We conclude this list with another suborder of parrots. 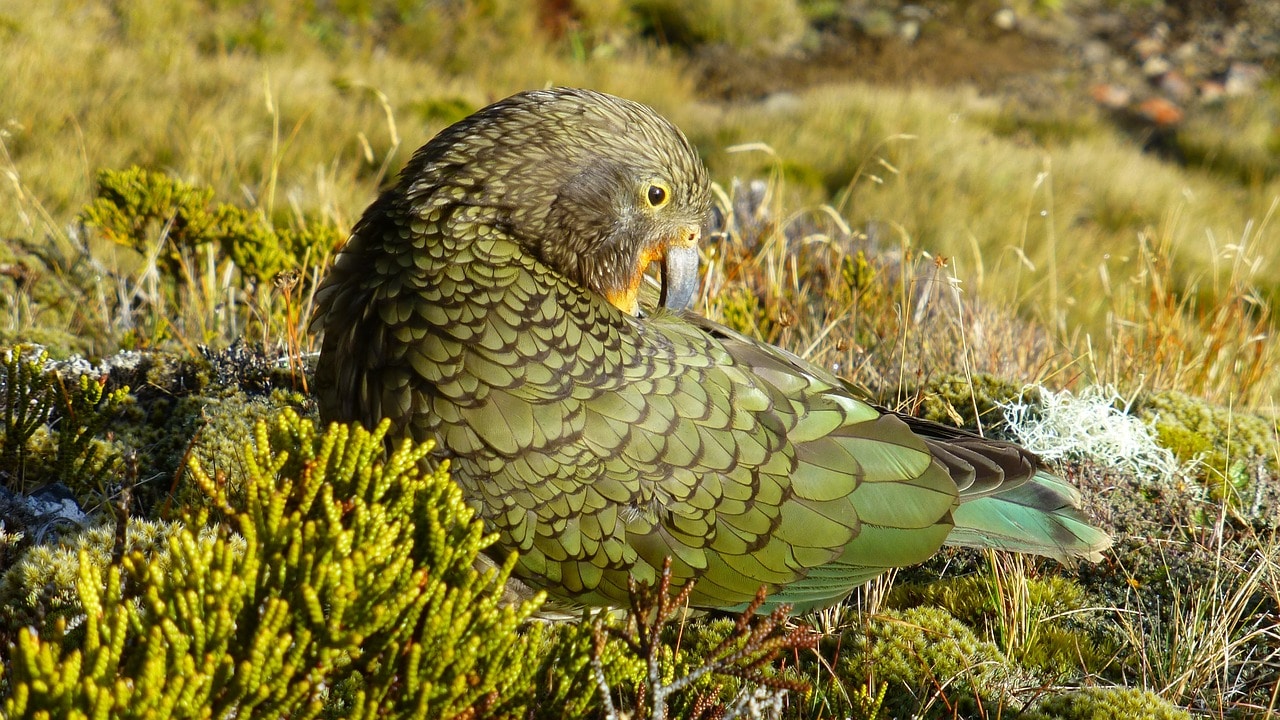 Kea is native to New Zealand and is remarkable for its problem-solving skills and its curiosity.

In various studies, Kea birds had different problems to solve, one of these being the trap-tube test. In this test, the bird had to use a stick and perform certain movements in order to reach a treat.

Apart from the problem-solving skills, keas are also very curious by nature and love to investigate manmade objects, from cameras to luggage.

The downside is that they tend to be overzealous in learning what the item is made of and can tear it to pieces.

Being a naturally trusting species, the Kea parrot is unfortunately on the list of endangered species. Maybe if more people knew how smart it is, they would do more to protect it and help it thrive.

More Smartest Birds And Intelligent Birds In The World

They belong to the parrot family. Research shows that cockatoos are smarter than human toddlers.

This colorful, fun-loving, Central and South American parrot is known to be a very intelligent bird of its species. Macaw is so intelligent that it can even perform magic tricks. 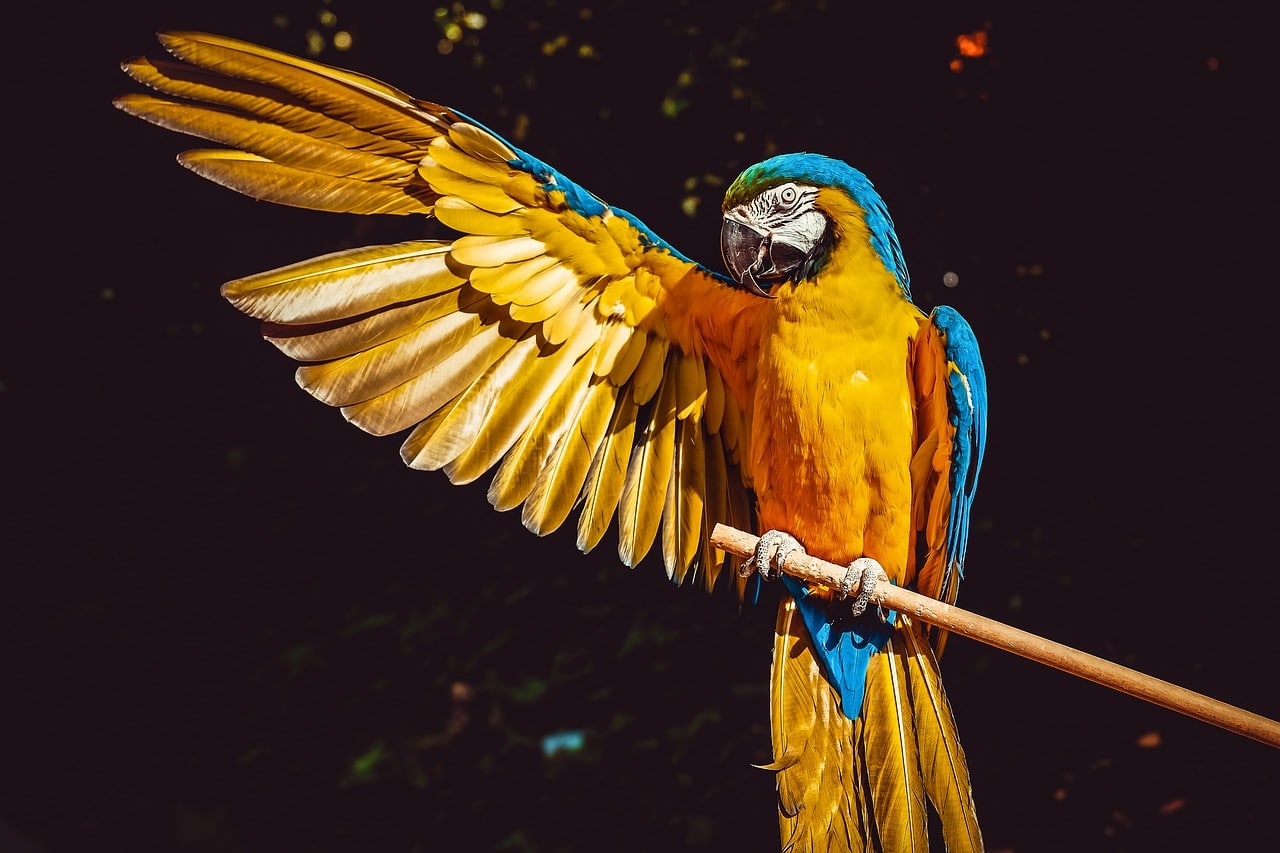 These birds belong to a family mixed with crows and jays. Both ancestors are intelligent birds, making them one of the smartest birds in the world. They are known for their exceptional memory and self-awareness skills.

These nutcrackers are well planners. These intelligent bird species can save food at more than 3000 locations and can remember these locations precisely even after seasonal changes.

These intelligent birds belong to the family Blue Jay or Eurasian Jay. They are excellent planners, and their intelligence levels go up to imitate humans.

Rooks belong to the crow family. It is one of the smartest birds which has commendable problem-solving skills.

Here is the list of dumbest birds in the world. In other words, not so smart birds. These birds are not as intelligent as Kea or the African grey parrot. They also do not have the intelligence as that of the raven intelligence.

Although these bird species may seem to be the dumbest birds due to their strange behavior, many claim that they are not as stupid as we think.

For instance, Turkey has a monocular vision, which explains the tilting of its head. Perhaps, this list of birds has just a reputation of “dumb birds,” which is far from reality.

This concludes our list of smartest birds in the world and some dumbest birds. No doubt Kea parrot and Macaw are amongst the intelligent birds. So what other birds do you believe I should include here? Have you come across any other intelligent bird? Do share your thoughts in the comments below.

Subscribe to us for more interesting articles and stay tuned.

Here’s How Bullying Affect Your Child And The Ways To Protect...

Why Do Smart People Do Foolish Things?

Best Places To Visit in Australia

From Google to Alphabet, 18 Amazing Facts About The Smashing Journey...