Cristina Calderon is 90 years old. She lives in the town of Puerto Williams in Chile. She is the last speaker of Yaghan, a language that used to be widespread in the Tierra del Fuego (the southernmost part of Chile). Until 2005, when her sister Ursula died, Cristina Calderon had someone to speak to in her native language. Once she eventually passes away, the Yaghan language will become extinct.

Endangered Languages – a Cultural Problem Unfolding Around Us

When we think of dead languages, we generally refer to Latin, Goth, Gaulish, and other languages of Indo-European tribes during the first centuries AD. However, the issue of disappearing languages is a continuous problem. As you are reading this article, someone dies in a tribe, reducing the number of native speakers of that language.

In an ironic twist, there are more speakers of Latin at the present (Catholic clergy, scholars, lawyers) than of many indigenous languages in various areas across the globe.

How many languages are on the path to extinction?

According to the UNESCO Atlas of the World’s Languages in Danger, out of the estimated 6,000 languages spoken across the planet:

By various degrees, 43% of the world’s languages are classified as endangered. This means that the global cultural heritage faces the risk of being reduced by almost half.

But why does this issue matter? Why should we care and strive to save languages from going extinct? Shouldn’t just let things be, and let evolution run its course and decide which languages are kept for posterity and which forgotten? The answer is an emphatic no.

Every Culture and Language Is Valuable for Mankind

In an effort to raise awareness of the importance of saving all the languages spoken on this planet, UNESCO declared 2019 the International Year of Indigenous Languages.

The official web page of the organization states that: “Through language, people preserve their community’s history, customs, and traditions, memory, unique modes of thinking, meaning and expression. They also use it to construct their future. Language is pivotal in the areas of human rights protection, good governance, peacebuilding, reconciliation, and sustainable development.”

Each culture and its associated language has its turns of phrases, myths, stories, and legends. Every story enriches our global culture. Think of the Epic of Gilgamesh. Or the tragedies and comedies were written by Ancient Greek playwrights like Socrates, Homer, or Euripides. Think of the beautiful love poems penned by the Roman poet Ovid.

If nobody cared to know the ancient languages they were written in and translate them into modern languages, all these wonderful writings would have been lost. Who knows what wondrous stories Cristina Calderon could tell us if we understood her language? Luckily, she is still alive, and we can still make sure that her culture is preserved for posterity.

The unlikely savior of endangered languages is one of the most recent human discoveries: artificial intelligence,

How Can AI Preserve Endangered Languages?

The most important and valuable characteristic of artificial intelligence is the high speed in learning and processing data. Associated with machine learning capacities, an AI entity can become a self-taught scholar in any kind of subject: from engineering to particle physics, from history to language learning.

The ability to store data, identify patterns and create new ones using the available resources makes AI the perfect tool for keeping endangered languages alive and available for future generations.

Of course, there are some limitations of AI that must be taken into account.

But beggars can’t be choosers. Faced with the risk of the complete disappearance of a language, we should do our best to save it, with all the inherent limitations described above.

As we are speaking (rather, reading) there are several ongoing projects around the globe that aim to save endangered languages using artificial intelligence. Here they are:

AI Projects That Aim To Save Endangered Languages

At first glance, there is nothing impressive about Opie. It is a robot built on the cheap Raspberry Pi platform, made of wood, a few tablets, a loudspeaker, and a mobile router.

However, its “brain” is quite sophisticated, is based on Google’s TensorFlow open-source AI platform.

Opie is a social robot built by the ARC Centre of Excellence for the Dynamics of Language (CoEDL), an Australia-based institution that tries to preserve the native languages of the continent.

The team of researchers behind Opie has painstakingly collected over 40,000 hours worth of spoken material in six Australian indigenous languages (Bininj Kunwok, Kriol, Mangarayi, Nakkara, Pitjantjatjara, Warlpiri, and Wubuy) and five languages that are spoken in the Asia-Pacific area.

Opie is used for teaching children indigenous languages through games, stories, and lessons. The AI entity also learns to adapt its behaviors and responses to the children’s reactions by mimicking facial expressions and developing its personality.

A student of the New Zealand indigenous ‘te Reo Maori’ language, Jason Lovell realized that he could not practice it with anyone. So he turned to artificial intelligence and developed a Facebook chatbot using the IBM Watson platform.

Robot can understand and reply to text messages both in English and Maori.

In the future, Lovell plans to develop Robot to understand spoken language, as well. Even if Maori is not facing a very high risk of extinction, this initiative is most welcome to keep it alive and also encourage people from other countries to learn it.

The First People’s Cultural Council (FPCC) of British Columbia works for the preservation of the indigenous languages in this area. The organization is in constant collaboration with local communities to create language archives as well as teaching programs and apps to keep endangered languages alive.

The FirstVoices platform developed by FPCC allows people to type in over 100 Indigenous languages using a special Keyboard App. The platform is hosted on Nuxeo, an open-source cloud-native content services engine.

The engine incorporates both artificial intelligence and machine learning. Thanks to this modern and convenient tool, First Nations can preserve and pass their language heritage to the younger generation. 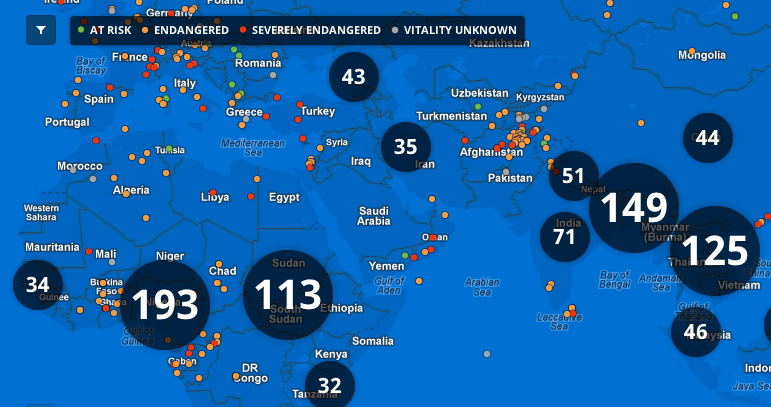 When Thomas Frey first started considering a platform to store and preserve endangered languages in 2012, he envisioned his project as a “Louvre of languages”.

At present, the Endangered Languages Project has already collected information on 3,410 languages spoken on Earth.

The project benefits from funding from Google and aims to become much more than a simple archive or museum of languages. Thomas Frey plans to create a facility where an AI Language Recreation Engine works side by side with humans (“curators of languages”) in the attempt to keep as many languages alive and work side by side with last native speakers.

Perhaps, Cristina Calderon will have someone (or something) to talk to in Yaghan, once again…

Which languages do you think will soon be on the list of endangered languages? Drop your comments below.

For more updates subscribe with us and stay tuned. You can also follow us on our social media channels.

Are you wondering to upskill yourself to succeed in life? Then perhaps, this psychological approach can be...
Read
Money

Stop Living From Paycheck to Paycheck! Here’s How to Save Money from Salary?

Want to know the secret of how to save money from salary each month? It's time to...
Read
Community

Whether you believe it or not, climate change is real. Ever since the industrial revolution (late 18th...
Read
Solopreneur

Many people wish they could make more money than they currently do in their job. Some of...
Read