The future of employment looks grim for many traditional jobs: automation or robots might soon take them over. All industrial manufacturing and even some services are now staffed by trained robots, some of them capable of machine learning and interfacing with each other. The question is: with so many robots, what will people do?

The answer is simple: people will develop programs that teach robots what they have to do and will supervise them in their work. This is just one of the many reasons why knowing how to code is one of the most in-demand job skills you can acquire right now.

The Future Of Workforce: Programmers Will Rule

At present, a programmer can choose to work in virtually any industry field. Let us take a look at some of them:

surgical robots and other smart devices used in hospitals and clinics need to be programmed, maintained, and upgraded;

educational software and mobile apps are on the rise – and programmers create them;

Do we need we state it? Video games are on the rise, especially virtual reality games and mobile augmented reality games. Programmers will be in constant demand in this field;

Even the manliest job in the world needs software, 3D simulations, and various applications for training and safe reconnoiter of dangerous areas.

The conclusion is simple: if you want to be certain that your job will not become redundant anytime soon, you should choose to program. This being settled, your next step is to decide what programming language you will learn.

The World of Programming Is In Close Connection with Market Demands

Professional programmers do not simply pick a programming language and go with it. Just like with other job skills, some programming languages are more in demand than others. For example, as an office assistant, you are expected to know how to use the Microsoft Office software package. Knowledge of photo editing software is not really relevant for the job and certainly does not make up for lack of proficiency in other software types.

This is exactly what happens with programming languages, too. It is undeniable if we look at statistical data. In the chart below, Stack Overflow shows the results of a survey among professional programmers. The survey is very in-depth, and you should take a look at it, but what we need is the top of programming languages used by the respondents:

The next chart indicates the most in-demand programming language as per job postings on the job board Indeed.com: 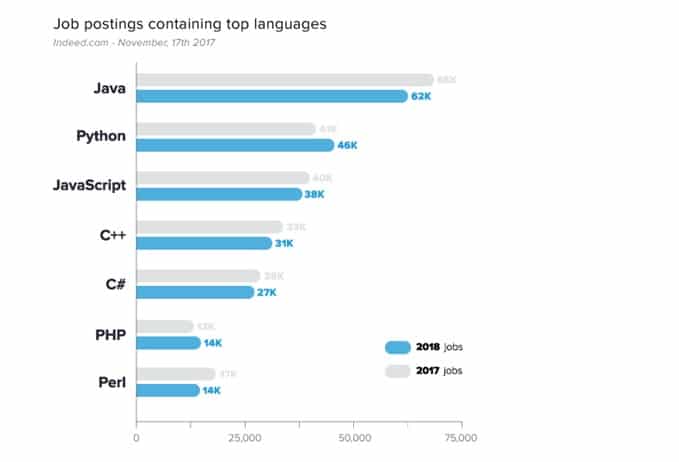 Programming Languages You Must Know To Master the Future

As you can see, the top five languages required by employers can be found among the most popular programming languages used by professional programmers. These two charts are our guideline in making the recommendations below:

JavaScript is the most popular programming language. Behind almost every web and mobile application, you can be certain that you will find JavaScript code. Yes, even this website that you are browsing right now has JavaScript elements embedded in it.

The most popular front-end development frameworks for web applications use JavaScript. These are:

Simultaneously, two of the most frequently used platforms to develop mobile applications and games, Apache Cordova and React Native, are also based on the JavaScript programming language. Since mobile phones are the computers of the future, you can be sure that you will have a safe job for a long time as a JavaScript programmer.

If you are breaking into the programming world, Python is a good language to start with. It is a general-purpose – you will find it in software, desktop, web, and server applications, and it is the language of choice for major players such as Google and NASA.

Python code has a simple and clear syntax. Thus it is easier to learn than other programming languages. Here is a short snippet of Python code if you don’t believe us:

As you can see, the code is based on instructions written in everyday language with very few special symbols or commands.

Now, don’t make the mistake of thinking Java is short for JavaScript – it is a different programming language. It was developed by Oracle and can be found running, according to their own statement, on 3 billion devices (pay attention to the pop-up window when you are updating Java on your computer). Also, nearly 90% of the Fortune 500 companies rely on developing their business tools and applications.

As a Java programmer, you can work in big data, as a backend developer, as a system engineer, or even as an Android developer. Without a doubt, you will never find yourself short of job opportunities if you choose to specialize in Java.

This programming language is one of the veterans, so to say. It was created in 1985 and continues to be a popular and solid choice for developing desktop software and applications. Some of the best-known companies that use C++ daily are Microsoft, Oracle, Adobe, and PayPal.

It is not an easy programming language to master, but you can always count on great career opportunities ahead of you once you do. For better understanding, this is a snippet of C++ code:

PHP is mostly used for web development. Basically, as long as websites will exist, there will be a demand for PHP developers. PHP code is used to cover some of the functions that HTML cannot handle and is also used for interfacing with MySQL databases.

The most popular web development platform, WordPress, works with PHP. Thus, you can start your career by developing WordPress plugins and then moving on to more complex projects. Although many programmers deem PHP an outdated, bulky, and slow programming language, you must remember that it is still one of the most frequently used languages globally, including major social media platforms like Facebook and Twitter.

Apart from these programming languages, you can also check out the others presented in the charts above. However, the most important thing is that once you started with a programming language, you should always be on the lookout for new developments and updates and new ways in which you can use your skills to create digital properties an employer would pay for.

Do not hesitate to share your thoughts in the comments section below. Subscribe to us for more exciting articles.

How to Start Dropshipping on Amazon

What is a One Way Video Interview and Tips To Crack One?

The Person Who Left You Did You A Favor, It’s Time...

Are Our Homes Slowly Killing Us? Surprising Facts About Indoor Air...

The Best Medical Trends of 2019

5 Ways How Social Media Is Killing Your Real Life Relationships

How to Protect Yourself From Being Scammed?

How Seasonal Affective Disorder Impacts Your Decision Making in Winter?